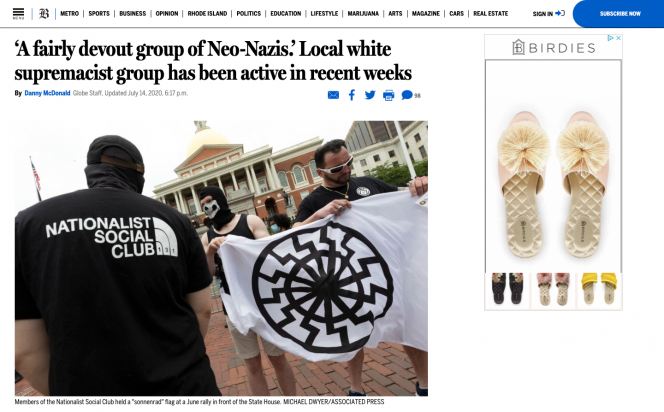 “At the State House rally, one man in the group had a visible swastika tattoo on his calf. He was identified as Anthony Petruccelli, who has ties to Lynn, by Samson Racioppi, a rally organizer; by Hill, the research fellow; and by Ben Lorber, a research analyst who focuses on white nationalism and anti-Semitism for Political Research Associates, a progressive think tank in Somerville.”

“Lorber said the Nationalist Social Club embraces anti-Black racism and described the group as being deeply anti-Semitic as well.”

“Asked about the terms used to describe his group — racist, white supremacist, and Nazi — Hood said at one point, “If anyone calls me them, I don’t tell them they’re wrong.” At a different point during the interview, he said he does not think white people are inherently superior to anyone else. But when asked if he considered himself to be racist, he answered, ‘Sure.’”

“Hood contended his group is “not inclined to commit violence,” but Lorber described the organization’s ideology as combining Neo-Nazism and violent white supremacy with a “commitment to street mobilizations and direct action, including sympathy for ‘accelerationist’ tactics.” Lorber said accelerationist white supremacists seek to commit acts of terror intended to incite a race war they hope would lead to the collapse of the existing social and political order, after which they could establish a ‘new all-white society.’”

“’They hope to capitalize on the resentment, anger, and alienation felt by some white Americans in this moment, to win new recruits to the violent white supremacist cause,” said Lorber, speaking about the Nationalist Social Club.”

“While Lorber said Hood was the leader of the club’s New England chapter, Hood claimed the group has no formal leadership. Hill said Hood has described himself as a founding member of the group, and she said that a founder ‘would be a presumed leader.’”

“Lorber said the club is also active in Tennessee and Central Florida, “where their messaging includes explicit support for Hitler” and opposition to the removal of Confederate monuments.”

“During recent weeks, club members showed up at a Black Lives Matter rally in the South End and hung a banner from a Boston overpass reading “New England is ours,” according to Lorber. They have also placed stickers advertising their group in Worcester ahead of a recent Black Lives Matter rally, among other activities, he said.”