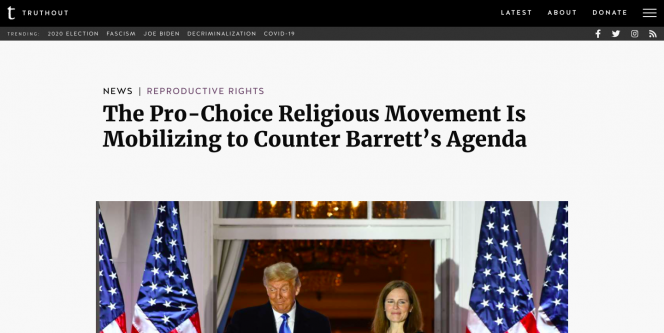 “For decades, the Christian Right and its many allies in state and federal government have taken an incremental approach to making abortion wholly inaccessible, essentially rendering Roe v. Wade useless for large swaths of the country. This has been the crux of their successful anti-abortion strategy for decades. President Donald Trump has proven to be the icing on the anti-abortion cake, as his administration has done the bidding of the Christian Right in order to maintain power, a phenomenon that investigative journalist and senior research analyst Fred Clarkson explained in a piece about white evangelical support for Trump.”

“Clarkson works at the social justice think tank Political Research Associates (PRA), where he recently published an essay that makes a bold, well-supported argument: The pro-choice religious community in the United States “could provide the moral, cultural, and political clout to reverse current antiabortion policy trends in the United States.” The problem, however, is two-fold: These communities are not well identified or sought out by abortion advocates, the media, and elected officials, and this “wide and diverse constituency is insufficiently organized by the prochoice religious community itself. But it could be,” argues Clarkson.”

“Clarkson, who has written about politics and religion for more than 30 years, has long argued the pro-choice religious community is a “sleeping giant,” and there is a precedent for members of clergy playing a direct role in ensuring people have access to abortion.”

“Before Roe v. Wade, the underground network of mostly Protestant ministers and Jewish rabbis was “the largest abortion referral service in the United States,” Clarkson wrote in his essay for PRA, “eventually involving about 2,000 religious leaders who, in addition to helping people obtain safe abortions in the United States and abroad, lobbied for the repeal of abortion laws.””

“What Scott is describing is very much aligned with a series of recommendations featured in Clarkson’s essay for PRA, namely that pro-choice religious communities need to create organizations outside of traditional religious institutions. Clarkson, who also created an annotated directory of the pro-choice religious community, acknowledges that these communities are “marginalized within religious and political organizations and broadly in public life” and therefore “easily divided and kept from becoming politically powerful.” But these groups constitute an overwhelming majority of the population, and “potentially the voting population,” Clarkson wrote.”