For the past 40 years, it has been you: PRA’s supporters, readers, subscribers, and community who have kept us going with your generosity, partnership, and movement leadership. It is you who best understand that democracy is not a state of being, but a constant and deliberate act.

This year, PRA celebrates our 40th anniversary by looking back to look forward.

Over the coming months, we will engage you–the community who has stood by us and enabled us to step up alongside our movements at the bleakest of times.

Together we will celebrate the unsung leaders who blazed the trail for today’s block and build strategies as thought leaders, organizers, field builders, and journalists. We will celebrate the strategic progress our movements have made through partnerships and alliances in blocking the opposition. And while we reflect on these wins, we will create space for imagining what the future of democracy must look like for all of us.

Why We Need Your Support

The January 6th insurrection demonstrated that the antidemocratic forces emboldened by the Trump regime continue to fuel racial resentment and support for increasingly authoritarian policies and officials. Our way forward is to block and build — together we must block these forces, opening a path forward to build genuine, justice-centered democracy.

As a movement, we overcame the politics of resentment in one of the most acute racial justice protest moments in recent memory; and we kept on building our power across communities because we know that solidarity is our only way to safety and liberation. Your support is key to ensuring PRA can equip the social justice field for threats coming down the pike. Here are just a few highlights of interventions we are working on:

While we celebrate this progress, we know the fight didn’t start last year or the last few years. We’ve been fighting for decades, and indeed for generations. We’re not done yet. Neither are the organized adversaries of justice and democracy. Your support ensures PRA is equipped with the resources for the next 40 years to block the Right and build genuine democracy.

Thank you for being on our team.

Are you a long-time friend of PRA? We are collecting stories and photos from the past 40 years and would love to hear from you! We are looking for stories, highlights, and photos that encapsulate, for you, the best of PRA–the most memorable moments, the trusted friendships, the invigorating wins, the terrain-shifting partnerships.

With fists raised and hearts up, we welcome you to participate in our year of celebration.

Explore the PRA archives and the 40 years of rigorous, incisive analysis that PRA does best.

Every Monday, we release a new featured article From the Archives that exemplifies how past PRA work speaks to our current moment, foregrounding historical analysis in our understanding of trends on the Right today. 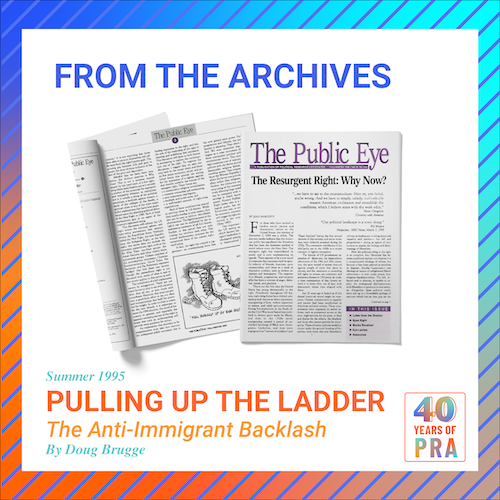 Pulling Up the Ladder: The Anti-Immigrant Backlash
By Doug Brugge, 1995

In the Summer 1995 issue of the Public Eye, Doug Brugge wrote about the development of anti-immigrant sentiments in the U.S. Over 25 years later, immigration remains a fiercely contested topic and this piece, highly relevant.

Dani McClain talks to activist Shana griffin on the policies to reduce public housing in New Orleans in the wake of hurricane Katrina, and the impact that these policies have on communities.

Pérez details the efforts of activists in Washington D.C. to increase the awareness of trans rights and trans justice, and battle discrimination, through an ad campaign.

Neoliberalism’s realignment towards deregulation of markets and the empowerment of corporations aids corporations skirt government regulations, and violate labor laws.

An excerpt from their seminal text ”Racial Formation in the United States.” Omi and Winant discuss how the idea of colorblindness was use to further the neoliberal agenda.

Hardisty discussed the Right’s “law-and-order” ideology and the racial implications of the “tough-on-crime” rhetoric.

George Wallace and the Rightward Turn in Today’s Politics
By Dan T. Carter, 2005

Prompted by a repressive voting law in Georgia in 2005, Carter centered George Wallace in an exploration of the rightward shift in U.S. politics.

Broken windows policing is not only all too often lethal, it also contributes to the use of excessive and illegal force in the context of the most mundane police encounters.

The Wise Use Movement: Right-Wing Anti-Environmentalism
By William Kevin Burke, 1993

Burke covers the Wise Use movement and it’s use of massive misinformation campaigns to stall or undo environmental protections for the benefit of their funders or members.

The New Christian Zionism and the Jews: A Love/Hate Relationship
By Rachel Tabachnick, 2010

Tabachnick looks at the history and spread of Christian Zionism, the Christian Right’s support of Israel, and the way this movement fuels antisemitism.

Email Aidan Orly, Donor Program Manager, at a.orly@politicalresearch.org to find out how you can get involved in the anniversary celebrations.