ALEC: The Right-Wing Group Behind "Stand Your Ground" 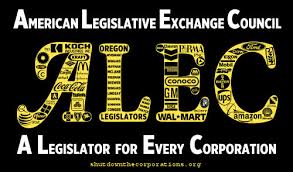 Since the Supreme Court’s controversial Citizens United ruling in 2010, there has been a chorus of debate over the clout of corporate America in politics and the appropriate role these entities should play in campaign finance. But while groups on the Right spent over $700 million during the 2012 election cycle in a failed attempt to elect Mitt Romney as president, conservative policies have been successfully propagated through opaque and less publicized strategies.

The American Legislative Executive Council, or ALEC, has been at the forefront of advancing some of the most odious items on the Right’s agenda. ALEC is a nationwide network that brings together elected state representatives and powerful organizations and individuals in the corporate community, in order to pass legislation benefiting big business interests—almost always at the expense of the public good.

Though ALEC has been around for 40 years, the group was largely unknown to the public until the death of Trayvon Martin in February of 2012. The incident called attention to Florida’s “Stand Your Ground” law, which was passed in 2005 and promoted by the National Rifle Association through its ties to ALEC. The ensuing bad publicity caused companies such as Dell, Coca-Cola, Proctor & Gamble, and Amazon to withdraw from the controversial organization. Still, powerful companies such as ExxonMobil remain members, as do prominent individuals, such as the omnipresent Koch brothers.

ALEC was founded in 1973 by Henry Hyde, Lou Barnett, and Paul Weyrich. Weyrich went on to found the Heritage Foundation the same year, before he co-founded the Moral Majority in 1979 with right-wing evangelical Jerry Falwell. As an organ of the New Right, ALEC’s rise coincided with the presidency of Ronald Reagan. In its 1981 Annual Report, ALEC stated that “…Reagan was one of the first leading Americans to support ALEC,” and that by 1981 its membership had shot up to 1,500 from only 46 members in 1976.

ALEC operates under the guise of a 501(c)(3) non-profit organization, professes a nonpartisan orientation, and expressly denies being a lobby. Such status allows ALEC to avoid paying taxes even as corporate members receive tax write-offs. In reality, ALEC’s partisan commitments are clear. In keeping with its strategy of effecting change on a state level instead of through Capitol Hill, businesses pay up to $25,000 to become members of ALEC, at which point they gain unfettered access to thousands of (mostly Republican) lawmakers who are also members. Lawmakers and corporate actors mingle at conferences, forums, and other luxurious settings before ALEC legislators head back to their respective state capitals with draft laws in hand peddled to them by self-interested corporations.

ALEC may not call itself a lobbying group, but the organization writes model bills designed to be passed verbatim in statehouses across the country—and ALEC claims that nearly 200 of its bills are passed every year. Examples of ALEC-inspired legislation include the draconian immigration law in Arizona, SB 1070, which stood to benefit longtime ALEC-member Corrections Corporation of America (CCA) because of the resulting increased detainee rate. Wisconsin Governor Scott Walker, too, has worked extensively with ALEC. The state’s 2011 anti-collective bargaining measure, which severely weakened public sector unions, was heavily ALEC-inspired.

These model bills are hashed out in what ALEC calls “task forces” headed directly by state legislators and corporate interests. There are currently eight task forces, including: the Civil Justice Task force; the Energy, Environment, and Agriculture Task Force; the Telecommunications and Information Technology Task Force; the Commerce, Insurance and Economic Development Task Force; the International Relations Task Force; the Education Task Force; and the Tax and Fiscal Policy Task Force.

Some of ALEC’s most destructive long term initiatives regard environmental issues. In January of 2013, ALEC was pushing for passage of its “Environmental Literacy Improvement Act” in Oklahoma, Colorado, and Arizona, which would have sanctioned the teaching of climate change denial in public schools. Tennessee, Louisiana, Texas, and South Dakota already have such laws in existence from ALEC bills. Colorado has faced a particularly aggressive onslaught of ALEC-backed legislation, but overall the state has successfully resisted. Not only did the climate denial bill fail to pass there, but Colorado also recently passed a bill raising the standards for renewable energy production for rural power coops, which ALEC vehemently opposed. Corporate responsibility groups, such as Ceres, have recently begun a campaign alongside shareholders to pressure companies to renounce membership in ALEC because of the group’s opposition to pro-environmental legislation.

Among other issue areas, ALEC has been behind legislative initiatives nationwide to protect corporations from liability, disenfranchise workers and voters (voter ID laws), obstruct sound tax policy, and privatize public goods such as education. The organization has been a driving force in some of the most controversial policy proposals from the Right in recent years, working to further erode democratic principles and basic rights.

Catholic Democrats & the Group Behind the Anti-Planned Parenthood Videos

Before the Alt Right

Anita Hill and the Growth of Misogynist Ideology
Alex DiBranco