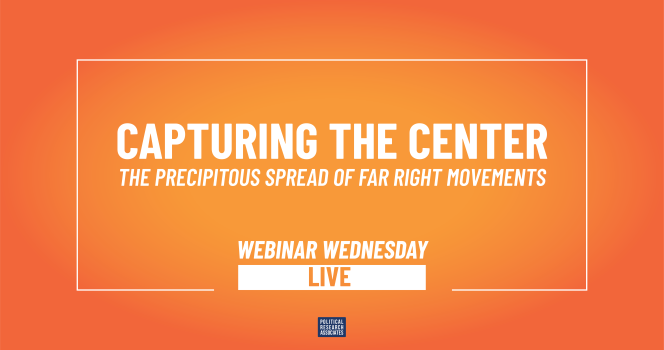 Beginning in the 1980s, we watched as neoliberalism, championed in large part by the New Right, seized both the Republican and Democratic Parties; making austerity, privatization, and individualism the core tenants of American life. Now we’re seeing how Far Right ideology, including White nationalism, anti-trans and anti-lgbtq advocacy, misogyny, and authoritarianism, have captured the mainstream Republican imagination. As the pendulum swings towards fascist authoritarianism, we track and resist the oppressive, anti-democratic movements fueling and funding this dangerous ideological shift.

In the same breath as decrying so called liberal identity politics, the U.S. Right declares itself representative of an oppressed White, Christian social class, fly Blue Lives Matter flags in place of Old Glory, and bedeck themselves in the cultish paraphernalia of Trump’s MAGA movement. With pins and badges signaling adherence to QAnon or movements like the groypers, right-wing politics have taken on the role of cultural identity for millions of Americans. In this discussion, we will examine how the “Culture War” frames the Left’s struggle to preserve a faltering American democracy and establish a new vision for inclusion and justice that makes meaning of and builds solidarity across identity.

The Next Frontier: Comprehensive Sex Education in the Post-Roe Era

The webinar asked the question: “What’s next for the anti-abortion movement in this post-Roe moment?” with a focus on the ongoing anti-comprehensive sex ed movement, its overlap with the antiabortion and anti-trans/anti-lgbtq movements, and, finally, with a nod to the implications for reproductive justice in public education given the recent SCOTUS decisions undermining the separation of church and state.

Beyond the Hate Frame: When Systemic Violence Masquerades as Hate and Extremism

From the candidates in 2022 races carrying the mantle of the Far Right to the treatment of anti-LGBTQ persecution as “phobia”, join PRA Research Analysts Ben Lorber, Habiba Farh, and Heron Greenesmith as they name and explore the language and policies that obscure purposeful and concerted programs of social order maintenance. In this conversation, they will answer the questions: “How does the designation of “hate”–i.e. hate crimes, hate groups–and “extremism” or “fanaticism” perpetuate hegemonic oppression? And who benefits from this design?”

From state persecution of Muslims in the post-9/11 era, to the criminalization and demonization of sex work, to the alignment of county sheriffs with influential far-right movements, this series explores some of the most pressing and historically-rooted manifestations of state violence and the work of social justice organizers working to dismantle them. Read about our panelists and watch the recordings at the links below.

Big Tech: Anti-Muslim Racism, Surveillance, and Violence in the 20 Years since 9/11

It’s Not Over Yet: Spring/Summer 2021 Webinar Series

In the wake of four years of far-right populist governance culminating in a violent insurrection, PRA is holding steady in the knowledge that it’s not over yet. Read about our panelists and watch PRA’s five-part webinar series evaluating the state of the Right at the links below:

The Arc of History Bends Toward Climate Crisis

You Will Not Erase Our Kids: The High Stakes Fight for Trans Liberation

Mobilizing for Reproductive Freedom in the Battle Over Bodily Sovereignty

It’s Not Over Yet: A Conversation On the Fight for Democracy

On 11.17.20, PRA convened social justice movement leaders and PRA partners to reflect and strategize together as we discussed what it will take to build real multi-racial, feminist democracy for the long-haul.

In the weeks leading up to the 2020 election, PRA hosted a series of six moderated conversations with experts and social justice movement organizers exploring and challenging some of the most pervasive and influential anti-democratic movements in the U.S. today. We explored the influence of these right-wing movements on the election and the ways they will continue to represent a threat to democracy and civil rights regardless of the electoral outcome.

Read about our panelists and watch the recordings at the links below:

In Summer 2020, PRA researchers and invited guest speakers delved into topics ranging from White nationalism to COVID-19, offering perspectives on how right-wing actors are capitalizing on socio-political instability to advance their agendas, and sharing what the Left can do to combat these threats in pursuit of a multi-racial, feminist democracy.

Read about our panelists and watch the recordings at the links below:

Examining Antisemitism One Year After Tree of Life

What is antisemitism? How is it connected to other oppressions? How does it fuel White nationalism? How is it used by Trump and other right-wing leaders to advance a racist, exclusionary policy agenda?

On October 28, 2019, PRA and partners JFREJ, Bend the Arc, United We Dream, Never Again Action, Carolina Jews for Justice, and Jewish Community Action commemorated the anniversary of the Tree of Life shooting by examining these vital topics. We came together to strategize on how to confront antisemitism by building solidarity between Jews and other marginalized groups, animated by an inclusive vision of a world where everyone can thrive.

Read more about our conversation and watch the recording here.