Paramilitaries at Your Protest

Since the murder of George Floyd by Minneapolis police, PRA has documented more than 150 incidents of armed far-right actors showing up at racial justice protests.

They have threatened and harassed racial justice protestors, collaborated with the police, claimed to support police accountability, and shot and killed law enforcement personnel.

The presence of armed paramilitaries militarizes protest space, normalizes open carry of assault weapons in our communities, and offers an additional excuse for police to deploy military weapons and tactics against our communities. There have also been credible reports of young white men, possibly unaffiliated with organized far right groups, circulating in and around protests committing acts of vandalism, arson, and provocation without regard for and in contradiction of movement tactics established by Black-led organizations.

Though their numbers are usually small, these far-right and paramilitary activists have had significant consequences for Black-led organizing efforts, raising the level of fear and suspicion and distracting attention from the just goals of protesters.

To keep our movements safe, we all need to better understand who these paramilitaries are, what threats they pose, and what to do when they are present.

Take Action: Contact (or designate) a movement security person to receive reports, assess threats, and dispel rumors that can lead to fear/panic. Be brave but don’t be a martyr. Use mobile phones to take video or photos of far right groups when safe to do so. Record vehicle details (including stickers); uniforms/dress, patches, buttons, and insignia; weapons; group size; and actions. Forward your incident reports to the designated local security person who in turn can forward them to and seek clarification from PRA and other movement support organizations.

De-escalate: Vehicular assaults continue to be a significant threat to racial justice and pro-democracy protestors. There have been over a hundred documented attacks, and likely many more. In many cases, the car or truck does not try to drive straight through a protest. Rather, the driver makes an obnoxious or aggressive gesture near a protest group and then slows down or stops. At that point protestors, understandably upset by the threat of a vehicle assault, surround the vehicle. This is both extremely dangerous, and a set-up for the driver to injure or even kill a protestor and have it ruled self-defense, where the driver is “afraid for their life.” A surrounded driver may brandish or use a firearm or attempt to accelerate through the surrounding protestors.

Keep Perspective: While paramilitaries can be lethal, most violence against racial justice protesters comes from law enforcement, and the FBI is currently ramping up political policing by claiming that anti-racist groups (rather than the paramilitaries) are “terrorists.”

Know Your Rights: Make sure that you have the number for legal support written down. Never talk to the police without a lawyer present. Movement friendly legal resources include Creating Law Enforcement Accountability and Responsibility (CLEAR) and National Lawyers’ Guild (NLG).

Digital Security: Far-right actors have been seen to doxx activists, exposing them to both trolling and law enforcement action. Contact a movement-friendly digital security partner, such as Equality Labs, if you have digital privacy concerns.

Stay On Task: Our ancestors didn’t stand down in the presence of guns, dogs, or men who dress up to show their loyalty to supremacy, and neither will we. Designate some folks to keep an eye on security, so most can focus on winning the future. We have the momentum, the numbers, and history on our side.

Know Movement History: We have been here before. Far Right paramilitaries have been a part of the American landscape since slave patrols, anti-Indian militias, “rangers,” and private company security forces evolved into modern day police departments. Paramilitaries have recently become more numerous, visible, and active, encouraged by Trump’s rise to power, his defense of white nationalists, and his calls for violence against Black people. From Charlottesville to anti-quarantine reopen rallies to protests in defense of Black lives, a growing array of armed (mostly) white gangs threaten to accelerate white supremacist violence. 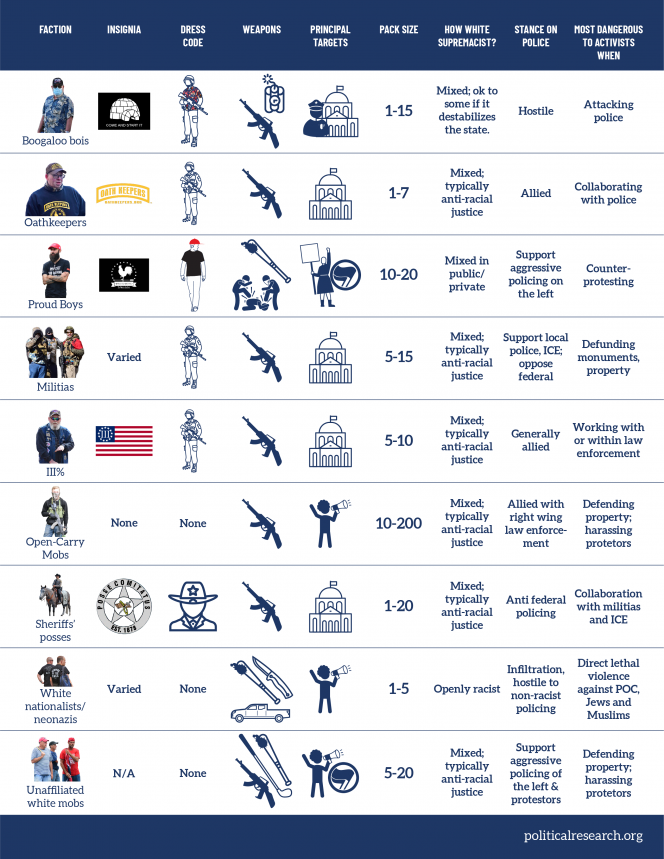 Culture and Belonging in the USA: Multiracial Organizing on the Contemporary Far Right

Joey Gibson and Patriot Prayer: The Westboro Baptist Church of the Alt Right