The Artists of The Public Eye

The Public Eye is a quarterly magazine published by Political Research Associates. It has featured over 200 authors and numerous artists and continues to be the gold standard for researchers, activists, academics, and others concerned with how the Right is influencing our daily lives.

Since a re-design in 2013, The Public Eye has featured the work of activist artists both on the covers and inside. Here’s a look back at what some of our featured artists had to say about the “Art of Activism”:

For more than 30 years, David Bacon (whose photography is featured in our Fall 2014 issue) has been writing about and photographing people who are displaced by poverty in Mexico and choose to cross into the United States in search of a better life. David writes: “For me, photography is a cooperative project. For over a decade, I’ve worked with the Binational Front of Indigenous Organizations, a Mexican migrant organization, and California Rural Legal Assistance to document this contradiction…I believe documentary photographers stand on the side of social justice—we should be involved in the world and unafraid to try to change it.”

Nansi Guevara (the cover artist for our Winter 2017 issue) frequently incorporates bright colors, resisting Eurocentric design traditions, and weaves together multiple languages in her art. She sees the creation of new worlds through art as something that’s also essential to activism. Socially conscious artists are at the forefront of movements and change, pushing boundaries and bringing the seemingly invisible to light. They “are the pulse of the community and art has the power to help us imagine a better world. It is essential in our fight for justice because we need to be able to first imagine change in our minds in order to create it.”

Negative media representations of Arabs and Arab Americans influenced Helen Zughaib’s art (featured in our Spring 2015 issue) especially while President Obama was running for office and frequently labeled a Muslim.  “I think that many artists are activists in some way or another,” Zughaib says. “They reflect their times, their environment, visually recording what happens around them. The work that becomes important has its finger on the critical issues of the day.”

Spinney’s work (featured in our Fall 2015 issue) often approaches serious issues—such as religion, sexuality and identity—informed by their own experiences; their style is a mix of dark topics and more humorous innuendos. When asked about the connection between their art and activism, Spinney said, “My art primarily investigates issues of queerness at the moment. I’m very invested in cultural production—whether or not it appears to possess an immediate focus on tangible change—because I think that to create cultural matter [and] art is to partake in a huge force that can work to shift our society over time.”

Meredith Stern (whose artwork is featured on the front cover of our Winter 2015 issue) embraces the “act locally, think globally” ethos. Stern has had a lifelong connection to grassroots activism but didn’t always feel that movements welcomed art. “It seemed that within activist circles, art and culture were dismissed as unnecessary,” she explains. “But art does play a role in promoting ethics, as a moral compass, and a reflection of society and the people within it.” She believes that with the rise of Occupy and Black Lives Matter, social justice movements are beginning to make room for art. “I’m pretty excited that people are starting to see art and culture as part of social movements. To see that it’s all connected,” she says.

Joshua MacPhee (our Winter 2016 cover artist) didn’t go to a traditional art school to learn his craft, but rather what he calls “the punk rock school of art,” where he became part of a politicized sub-culture and learned to work in a wide variety of media.

“For me making art is part of a practice of trying to change the world for the better,” said MacPhee. “Sometimes that’s simply constructing an image, sometimes it’s building a big social project that engages directly with lots of participants, sometimes it’s not making art at all, but just going on a demonstration, giving a little money to an organization doing important work, or using the platform art can provide to discuss important issues often not aired in the public sphere.”

We look forward to showcasing more activist art in the forthcoming issues. Want to contribute to The Public Eye? Check out our submission guidelines. To subscribe, click here. 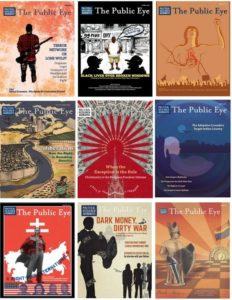