Paramilitaries at the Polls

What to Expect Around the 2020 Elections
Suspected Boogaloo in Raleigh, NC on May 1, 2020 (Credit: Anthony Crider/Flickr).
Political Research Associates
October 27, 2020

As we draft this memo in the days immediately prior to Election Day 2020, there are dozens of articles and opinion pieces pointing out possible “chaos” or “nightmare” scenarios related to the 2020 elections and what could happen in their wake. Interestingly, few of these are about the potential consequences of four more years of racist, anti-immigrant, anti-Black, anti-Muslim, anti-LGBTQ, anti-public good, and anti-democracy policies and appointments. However, whoever ultimately becomes the next President of the United States, the period between Election Day and Inauguration is going to be contested and potentially chaotic, and not just because of the actions and provocations of the Trump administration, but because of the reactions and interventions of far-right social movements. This memo will focus on how far-right movements may attempt to influence this period, what some analysts are calling the interregnum, and the likely consequences of their activities.

Prepare for Far Right Militancy as We Build Multiracial Democracy

We at Political Research Associates believe that regardless of the results of the 2020 elections, movements for racial and social justice will face escalating challenges from the far right, and without strategic and effective action, the political spectrum will continue to lurch to the right, with anti-immigrant, anti-Muslim, and anti-Black “law and order” policies becoming even more normalized. Spending on the public good will become even more degraded and demonized. And for all of that, the demographic changes, climate catastrophes, and the move to mass automation will be the backdrop for politics in the coming years.

For the far-right, defeat at the ballot is an argument for the bullet.

We want to emphasize the need for social justice leaders to call for sustained movement resources to address and out-organize right-wing movement building. In the event of a Biden victory, particularly if there is a Democratic majority in both the House and the Senate, the understandable tendency of liberal and centrist organizations will be to move policy. The far right, however, is not going away and our movements have to be ready to continue to fight it. There are tremendous opportunities to build on the momentum of the past five months, consolidating the multi-racial and feminist democratic movement leadership that has called into being an inspiring and potentially transformational alternative conception of “the people,” and of democracy itself. As at no time since at least the 1960s, there seems to be an opening to imagine and create an alternative to the market liberalism and colorblind racism of the last several decades. Rather than the kind of authoritarian aspirations represented by the Trump regime, it is perhaps possible to build toward a society that is democratic in more than name.

The new political reality we seem to be entering is not unfamiliar to students of the international scene. In many parts of the world, where nation-state level legitimacy is highly contested and rival ethnic, religious, and ideological factions regularly accuse each other of treason, the risk of death from political assassination is considered the price of running for or holding office. We believe that this is a threat that both movements for racial and social justice and the country more broadly need to take seriously. A recent report from the centrist Center for Strategic and International Studies, though we would take issue with their “both sides” framing, broadly supports this view. So does the Department of Homeland Security—with whom we have many more issues. Even as movement activity has reached a peak in 2020 not seen for decades, the risks we face from far-right violence, particularly in the event of a Trump loss, are entering a new phase. We cannot assume that the familiar relations between allied social movements, the state, the police, and the far right—as dreadful as they have been— are stable.

PRA has long understood that while a Democratic victory in 2020 could interrupt our current trajectory towards cascading authoritarianism, it would almost inevitably catalyze far-right militancy, including violence. Without a champion in the White House, many in the far right would conclude that advancing the cause requires robust extralegal organizing. For the far-right, defeat at the ballot is an argument for the bullet. The 1990s militia movement and Oklahoma City federal building bombing (with 168 fatalities) occurred in the context of the Clinton presidency; during Obama’s administration, we experienced the surge of Tea Party nationalism and the rebirth of right-wing paramilitaries in the form of such groups as Oath Keepers, III% militia, and the Constitutional Sheriffs and Peace Officers Association.

Paradoxically, liberal and progressive strategists have tended to regard the election of Democratic administrations as evidence of declining influence on the part of right-wing social movements, whereas recent history demonstrates that such elections are typically a prelude to a wave of right-wing militancy and violence. For the social justice movements PRA works with the existing challenges of systemic white supremacy will not go away. The right-wing social movements that laid the groundwork for Trump will be busier than ever, with a new legitimacy on the broader right and the potential collapse of the old “mainstream” conservative right. The long-term concerns, however, should be set against the possibility that right-wing efforts, in accelerated call-and-response with Trump, will react to a Biden victory as if it is the precursor of the End Times (here meant both figuratively, and in some cases, literally). Some things to anticipate in the case of any Biden victory (or potential victory), whether it comes early or late include: 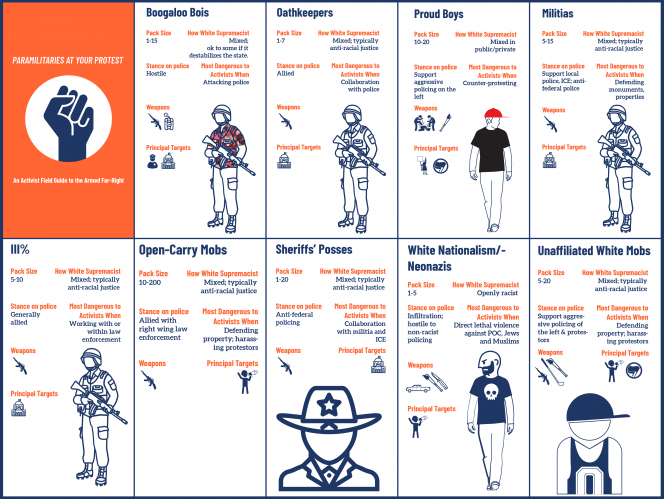 Below we lay out in short form what various specific movement factions and groups are likely to do on and around the election.

Regime ambivalent groups, such as some factions of what was for a short time called the “alt-right,” will likely confine themselves to amplifying the ineffectual and chaotic nature of protests and criticize both Trumpists and the vestige of the GOP establishment from the Right.

The hard ideological core of white nationalism will mount critiques of Trump and any rightwing politics that fails to center demographics and their priority of consolidating and expanding a large, permanent white population majority in the country.

Individual white nationalists, interactive with the panoply of pro-Trump and Trump-ambivalent movement factions, have always been the most violent faction of the right, seeing themselves as fighting an existential battle against imagined white genocide. Acts of focused political violence, highlighting the enemies they see as most influential (Jews, Black people, Muslims, immigrants), will remain a plausible threat.

Regime disloyal, anti-state factions of the far-right, including most notably the Boogaloo movement, will continue to insert themselves into protest situations where their calls for, or prediction of, civil war will encourage additional rounds of accelerationist political violence. There is no way to predict if this will happen in the immediate aftermath of the elections, but a chaotic transition and large-scale protests and left-right clashes will probably increase the likelihood of such violence.

Keep in mind the 2020 context of thousands of racial justice protests that have been met with hundreds of right-wing acts of intimidation, counterprotest, and violence. Even before the murder of George Floyd by Minneapolis police sparked this new wave of racial justice activity, the far right responded to public health measures enacted to protect public health during the pandemic with dozens of “anti-lockdown” protests that saw the coming out of the Boogaloo movement.

At the same time key types of interpersonal violence and bias crimes are sparked during times of heightened political tension. Violence against LGBTQI people will likely continue to escalate as individual queer people are seen as threats to misogynist, racist control. This has been the most deadly year on record for trans people (with 31 recorded murders as of mid-October and certainly more going unreported. The vast majority of these victims were transgender women of color. As the Trump campaign continues to weaponize anti-trans rhetoric, transgender people of color will continue to face direct harm or indirect neglect by establishment forces.

Law Enforcement and the Security State

Any analysis of election/post-election actions from the far-right must anticipate potential reactions and provocations from the state. Many, probably the majority, of far-right paramilitary actors are to some degree pro-regime/pro-Trump. However, an increase in political violence is sure to provoke a reaction from the security state—and that reaction is not likely to focus primarily on the paramilitary or racist right.

Here are some points to keep in mind:

Regardless of who wins the election, 2020 has been an extraordinary year in U.S. politics. There remain many open questions that we at PRA will be following closely and working with our partners to better understand, evaluate, and generate strategy around. Will the tectonic shift toward radicalized/nationalist “populism” under Trump lead to a Biden presidency accepting “soft” versions of white identity claims for immigration restriction? How will economic libertarians mobilize against a Biden administration—including through the new supermajority on the SCOTUS? Will the recession harden into a depression? How will the police and security apparatus respond to the pressures for radical transformation—and how can our movements both keep up the pressure and anticipate right-wing responses. Just how unjust will the distribution of a COVID-19 vaccine turn out to be, assuming one is developed, and how will forces left and right respond? Will interpersonal violence against LGBTQI people, intimate partners, migrants, and people of color worsen? In what ways will nationalists, explicitly racist or otherwise, attempt to rebrand the climate crisis and use it to drive an “America First” agenda? How will demographic pressures and changes shape all of the above? All of these open questions, problems, and challenges are opportunities for collaboration and imagination.

How Can PRA Help?

We will continue to support movement organizations in the atmosphere of rumor and misinformation and actual right-wing violence that we see coming. This will be more crucial and more urgent than ever in the days and weeks around the 2020 elections. The election’s results will open a new chapter in the fight for multiracial, feminist, and religiously plural democracy. PRA looks forward to navigating these narrows and fighting to build a democracy worthy of the name. Here are some things we have to offer:

Standing By for Violence: Ahead of November Election, Trump Inflames His Vigilante Base, PRA, October 1, 2020.

The Danger Within: Right-Wing Violence in Nevada, PRA with Progressive Leadership Alliance of Nevada (PLAN) and Indivisible Northern Nevada, October 16, 2020.

Paramilitaries at Your Protest: An Activist Field Guide, PRA, June 24, 2020